At OGP, I had to do load testing of the product. It was my first time therefore, I have no idea what tool to choose for this task, and I started looking through different tools and ended up using k6.io.

Load testing enable you do measure response time, resource utilization levels, able to identify bottle-necks and the breaking point of the application.

There are 2 success criteria for load testing.

Based on the previous usage collected, we can predict the growth for the near future and put some rooms ahead for the system to be able to scale when the growth hits. With the forecasting result, we can add or remove resources accordingly.

In AWS, this strategy can analyze history for up to 14 days to forecast what demand is for the following two days. Updated every day, the data is created to reflect one-hour intervals.

In this case, the usage will grow by 4-5 times in a very short period.

E.g, one particular Reddit post gets popular, and the link is then shared on other social media. Everyone including ghost users (without Reddit accounts) started visiting the page. First, we need to see how the system scales automatically, and how it performs to the spike. By doing so, we will also learn what is the breaking point of the system.

Successful criteria should be

2. Why k6? How about the alternatives?

So I spent few days finding out what is the most suitable tool out there for my need.

Python-based load testing library, and the oldest among the alternatives.

Another widely popular tool based on Javascript/Typescript.

Popular load testing framework made by Grafana Lab. Therefore, it has first-party support for Grafana.

I chose k6 for these reasons

Documentation is one of the most important factors for choosing it because if it is not well documented, and lack of an extensive list of examples for different scenarios could slow down our progress at writing load testing. In addition to that, I look for export formats and support for several protocols so that we can use the same load testing library for our future projects. Also, CI/CD will be crucial when we start integrating all these testing into automated processes.

k6 is a great tool, however it is quite expensive compared to the rest.

If your project is not accessible by public, and cannot be exposed to public/third party services, you can still use k6.

Tests can be run using our own local machine or using their cloud service.

The same applies to the visualization of the result. We can

If we do not want to share any information with the third-party services, we can use self-hosted option. However, the k6 cloud offers ease to set up, and its web UI shows a very details summary of the test, and it can also compare the result performance with previous tests.

With a pro plan, we can also generate a PDF summary of the test on k6 cloud.

Before we talk about k6 any further, let me explain the different type of load tests and what are their purposes. 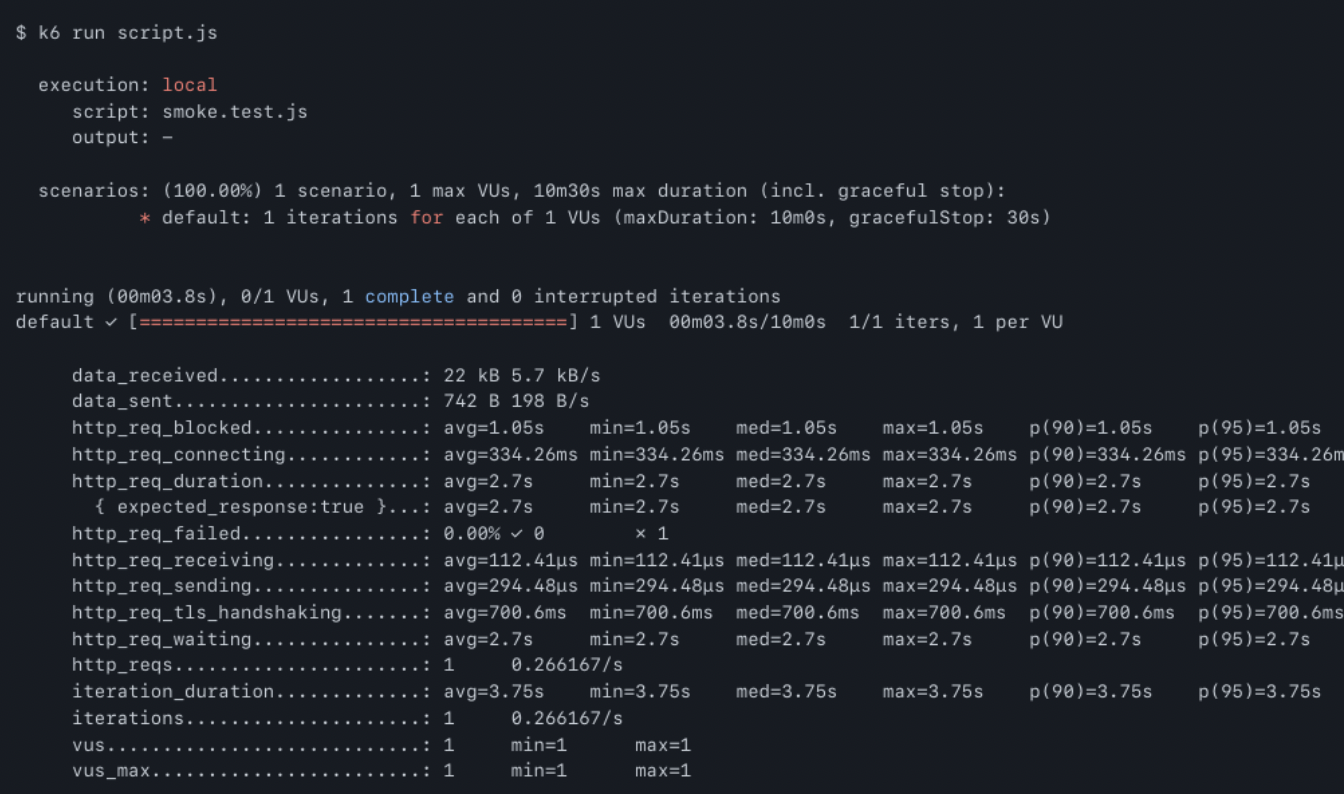 However, here are the key points we need to focus on in the metrics.

This metric is the combined duration of receiving, sending, tls_handshaking, and waiting. It helps us determine how long each HTTP request takes on average.

This shows the rate of failure, especially during the time of large requests coming into the system. We should be focusing more on this metric, especially in tests like stress and spike.

For a more detailed explanation of each metric, you can look at the following documentation.

Write load testing script on local and configured the test to submit the result to the k6 cloud.

First, you need to get the api-token from your k6 account.

Then follow the instructions from this page to set up the k6 cloud and k6 CLI.

Once it is done, go to the k6 cloud, create a new project, copy the project ID, and add it to the test script configuration as below. 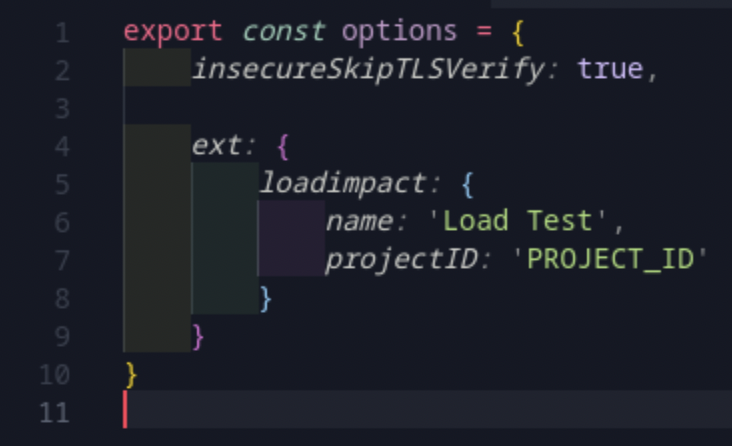 When you need to interact with the API or application server, write it in api.js (using k6 HTTP modules) and import it back into different load tests (smoke, spike, load, etc). This way, you can reduce the duplication of the application flow.

Setup and teardown of the test

Sometimes, you may need to set up some stuff before running the test and clean up the data after the test. This can be done in k6 via setup and teardown methods.

If defined, k6 will run the code inside the function before running the actual load test.

If defined, k6 will run the code after it finishes running the test.

In k6, you can also send additional information from the previous phase to the next phase.

For example, after you have created a new user in setup() phase, by returning the values in the Javascript object, we can pass those values to the next phases (load testing default function, and teardown method). 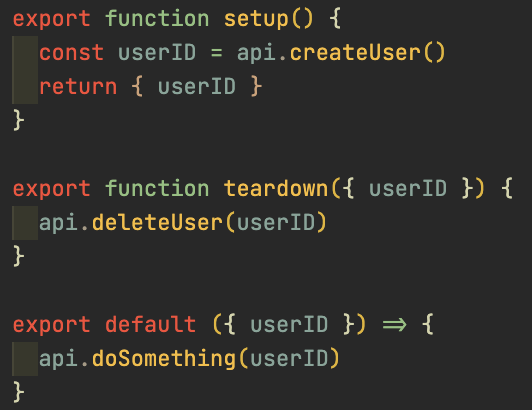 k6 is pretty great tool if you can afford the price. I wanted to share how k6 cloud visualization looks like but for privacy reasons I cannot. Therefore, you can take a look at their k6 cloud promo page and how to visulization with their cloud for how their cloud service.